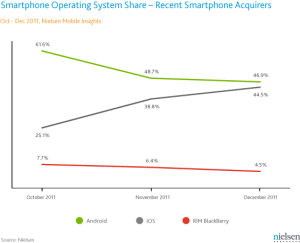 The quick response (QR) code is not new. It is a type of matrix (or 2 dimensional) code that was originally designed for the auto industry in 1994 by Denso Wave (a subsidiary of Toyota). The original idea was to create a code that could hold more data than a typical 1 dimensional bar code and that could also be read quickly by a hardware scanner. But the QR code’s ability to contain up to 30% in error correction is part of its magic. This means that a QR code could be scratched/damaged or partially unreadable and it may still be able to be scanned and may still contain all necessary data stored in the code. (more on this later).

The QR code can contain any type of data including binary and alpha. From a popularity perspective, QR codes are used much more outside the US, but interest and usage in the US is rising. As of this writing, the QR code is in much more widespread use in Japan, South Korea and the UK. But if you look around in any major US city, you will see QR codes on trucks, billboards and other outside advertisements, store shelves, in window displays, on business cards and even on tshirts and tattoos.

How does it work? QR codes are read by a scanner, which could be a dedicated piece of equipment in manufacturing. But the most visible growth in QR codes in the US is in terms of public facing QR codes aimed at everyday people like you and me that have a smart phone with a camera. Most camera-equipped smart phones ship from the manufacturer with QR code scanning software or a QR code scanner can be easily be downloaded and installed (typically for free). QR code scanners use the smart phone’s camera to capture the QR code image and use software to decode the data from the bar code. The scanning and decoding of a QR code is very quick and typically takes no more than 1 seconds.

QR codes can contain text patterns that signal the reader to respond appropriately. Some phones will prompt the user before taking action. The following table contains the popular patterns:

According to research from Internet Retailing, of the people that scanned QR codes in June 2011, approximately 58% scanned the code from their home, 39% from a retails store, 25% from a retail store, 20% scanned from at work, 13% scanned while outside or on public transit and 8% while dining out.

Innovative use of QR codes?
Creative use of QR codes?
The standard QR code is not all that attractive and some creative people are taking advantage that a QR code contains up to 30% error correction capability to incorporate artwork into their QR code. This artwork essentially makes some of the QR code unreadable, but if you have enough time (or enough smarts to write a program to do the work for you) you can overlay art or modify your QR code to make it more attractive. For example, some folks have added their logo or rounded the corners of the QR code blocks. A great example is by Duncan Robertson to customize a BBC QR code:

How to make your own?
If you search you will find many free QR code generators. Check the generator’s usage policy as some don’t allow you to use them for commercial use. Check out http://qrcode.kaywa.com/ and http://snapmyinfo.com/vcard or Google’s free API for creating your own tool.