I am building a large Arduino-based project and want to incorporate music from the circuit board that I ripped out of a Hallmark card that plays music. This blog entry is a guide to build a simple way to control the Hallmark circuit from the Arduino. In order to build this project you will need the following parts/components:

In case you are not familiar with these musical Hallmark cards or have not torn one apart, inside the card there is a small circuit board containing a battery and a small speaker. On the circuit board, there is a piece of plastic (that acts as a switch) that slides back and forth when you open and close the card. When the card is closed, the plastic is separating the two contacts and therefore not playing music. When the card is opened, the plastic piece allows the two contacts to touch, and results in music playing. All cards are pre-programmed with music and the card I chose has a 25 second clip of “Over the Rainbow”.

This project has two primary goals:

Below are the steps to control the card’s circuit board and play music from the Arduino: 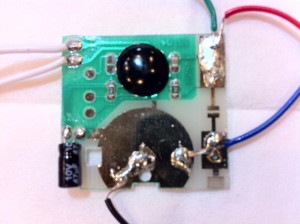 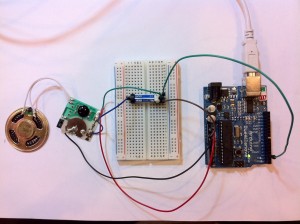 Note that I chose 25 seconds for the initial pause because that is approximately the amount of music that is played by the card that I chose. You should experiment to find out the right length for your card. Then customize this program as playing the song over and over in a loop will drive you mad. I’m planning to use this hardware and software technique to play music from a larger Arduino electronics project.

Anyone who uses Outlook tasks and notes and an iPhone knows the pain of not being able to sync tasks and notes over-the-air from Exchange to the iPhone. I was surprised when I first realized that the Exchange client oin the iPhone only syncs email, calendar and contacts and does not sync notes and tasks. I was surprised because I assumed it would be like any other Exchange client and sync tasks and notes as well. Initially, not being able to sync notes did not seem like a showstopper. But over time it became more and more problematic as I was unable to access notes from Outlook that I have become dependent upon.

A colleague introduced me to Evernote (see evernote.com). Evernote is a service that allows you to save notes containing various types of media to a central, cloud-based service. The notes are available for viewing and editing using a variety of applications including: traditional web, iPhone, Windows dand Mac. Best of all, the service and clients are free if you do not exceed a (fairly generous) disk space allotment. Notes that are created or edited on any platform are quickly and efficiently replicated to all clients.

I found myself in a bind. I had over 125 notes in Outlook 2007 (I was not using OneNote) and could not find an existing way to import these Outlook notes other than to copy and paste each note, one-by-one, into my Windows Evernote application. So I wrote a program to convert the Outlook notes into a format that can be imported into the Evernote Windows client (Note: as of this writing, the Mac Evernote client does not support this import feature).

My Outlook to Evernote (OL2EN) program takes an exported Outlook 2007 Notes file in Windows CSV format as input and creates an Evernote compatible import/export XML file as output. The Evernote import/export file can then be imported into the Evernote Windows client.

The complete steps to get started and import your Outlook 2007 notes are detailed:

OL2EN is free to use for commercial or non-commercial purposes. If you find OL2EN useful or want me to add any additional features, or run into any errors, please post a comment. OL2EN saved me from a lot of typing. I hope someone else can make use of it as well…